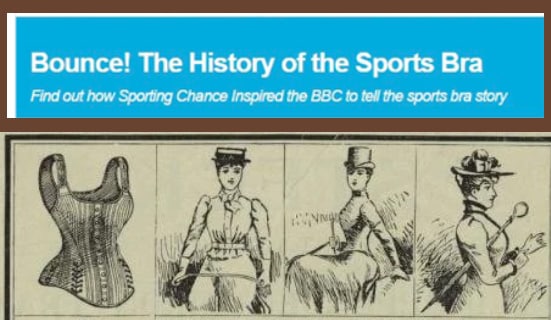 This era of “athleisure” may effecticely spell the death of the traditional brassiere, as more women choose to wear sports bras on a daily basis. Today, we ae going to talk about The ‘sports bra’ that Changed Women’s History.

In the popular television series “Baywatch,” Pamela Anderson plays a sporty lifeguard patrolling the glittering sands of Los Angeles, never hesitant to jump into the shimmering water when she spots anyone drowning or in an accident.

What are breasts for exercise?

Her reaction to danger is so fast that we need to use a slow-motion look closely, found that she wore a red swimsuit. There’s nothing in front of her chest to protect her, she never revealed a painful expression in the movie, not a scar.

This is in stark contrast to the ancient Greek era when women had to have their right breasts removed to compete in archery events. French athlete Violette Morris opted for a mastectomy in the 1920s to make it easier to control and drive her sports car.

In fact, female athletes do have a lot of problems with their breasts. They often have to endure the pain of breast tenderness and even wrap their breasts with elastic bandages for many levels to provide support.

Until Hinda Miller invented the sports bra in the 1970s, she recalled working out in the 1970s, even a simple run was taxing her breasts considerably.

In the 1970s, running became a popular form of exercise, which necessitated the design of a proper sports bra. Many women like running. The short 5 kilometers could get nipple bloodied. And skin bleeding. Shaking of the chest is not healthy for women, breast ligament may therefore be torn, injury, and the shape of the chest, organizations have may go out of form, This is especially harmful to women who want to breastfeed in the future.

So Miller and two friends, Lisa Lindahl and Polly Palmer-Smith, set out to solve the problem for sporty women all over the world, and one day they had an idea, the inspiration comes from a basket of freshly washed clothes.

When Linda’s husband pulled a pair of underpants out of the washing machine, wrapped them around his chest and pulled them on like bras, Miller realized that’s what they had been looking for. So they immediately went to buy the two men’s sports pants, put the original elastic which around the man’s waist under the woman’s chest, as support, then after cutting, sewing, the sample of the first women sports bra “JogBra” was finished, without any buttons.

They were keen to take the product to the world, but at least they would try it in sporting goods stores, some of which were rather shy about displaying women’s underwear, so the first version came in an all-black box. The first 40 pieces were quickly sold out, and the following year they sold $500,000.

We have a lot of people who say they want to sell, Miller said, and we do a simple test on them, We give them a simple test. If you can look someone in the eye and say ‘nipple’ smoothly, you’ve passed the test.

What was the impact of the invention of the sportsbra?

Goldie Sayers, who has won 11 British javelin titles, said: ‘I wouldn’t have won so many competitions without my sports bra. It has become an integral part of my performance.’

Natasha Baker, an equestrian at the Paralympics, said the sports bra changed her life completely. In the 19th century, Britain female riders had to wear waistcoats. If you have to worry about whether your underwear will fall off, it will affect performance. While sportsbra gave her great help.

US football player Brandi Chastain scored the winning penalty kick at the 1999 Women’s World Cup finals, after which she ripped off her shirt and the bra shocked the world.

Nike’s sales skyrocketed as millions of women clamoured to purchase the exact bra for themselves.

Paula Radcliffe, the retired world marathon record holder, believes the popularity of sports bras, in addition to education and advocacy, provides incentives for women to feel more comfortable wearing them.

With traditional underwear, it was difficult for women over D cup to find a suitable bra, but as the sports bra market was developed, manufacturers began to look for more support and stylish styles, like custom seamless sportsbra.

Compared with men, women do have many safety problems in sports, which hinder their enthusiasm to participate in sports. However, the majority of female compatriots also hope to be in motion at the same time, give a sense of consideration to comfortable, happy and let themselves more attractive!