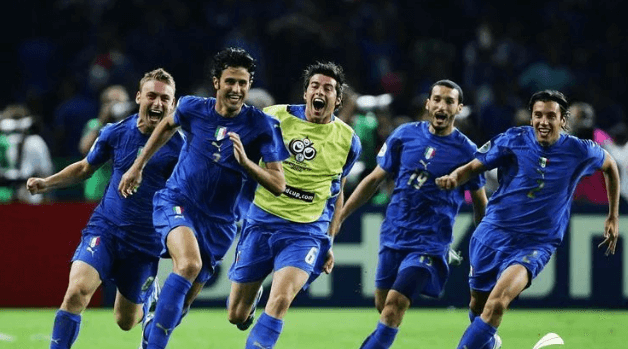 Soccer Teamwear From 19 Countries: Which Is Your Favourite?

Soccer teamwear refers to the clothing worn by the players who play soccer. It generally includes short sleeves on the upper body and shorts on the lower body. The fabric with good air permeability and hydrophobicity is generally used, which will not affect the physical activities of athletes. It is not easy to produce static electricity, and it is light in weight. A good Jersey helps athletes to improve their performance. To customize your own soccer teamwear, please visit chinafitnessclothing.com.

The soccer team wear is one of the essential elements on the court. As a player’s robe on the field, it has become the sustenance of fans, carrying the football belief of generations of fans. All kinds of colorful and personalized jerseys have entered the audience’s field of vision with the appearance of color TV. Apricot samba, blue and white tango, orange storm, blue apenning… These classic jerseys, together with that group of people, that team and that country, have become indelible memories.

Home jersey: The Russian Football Association and Adidas have jointly launched a new home jersey for the national team. The bright red jersey matches the white neckline and sleeves on both sides. The jersey is inspired by the Seoul Olympics exactly 29 years ago. The adidas classic tri-stripe triumphant and golden double-headed eagle team emblem demonstrates the national honor represented by the team. The inside of the jersey collar is designed with white, blue, and red flags, and is decorated with a golden double-headed eagle pattern. These all represent the national image of Russia. The slogan “Вместе К Победе” emphasizes unity and victory.

Away jersey: blue and white, supplemented by fuzzy geometric decorations.

The Egyptian national team has entered the World Cup finals again after 28 years, and its home and away World Cup are still designed and produced by Adidas. The main color of the home team uniform is red. If you look closely, you will find that the jersey has a block design similar to a “checkerboard” pattern. The iconic white vertical stripes on both sides and the black stripes appearing on the neckline and cuffs make the jersey not too monotonous.

Away jerseys: PUMA2018 spring and summer new series of national team away jerseys follow the principle of unified design. The design of each jersey is unique and refines the core elements that represent the country. The left chest is decorated with a redesigned national team badge. The four golden five-pointed stars lined up on the top represent not only the two World Cup champions, but also the two Olympic football champions before the establishment of the World Cup (1924 and 1928). The gold PUMA logo is displayed on the right chest, and they also appear on the two sleeves.

Away jersey: The design is inspired by the 1980 jersey, “Halo Blue” with bright orange stitching.

Home jersey: The design is inspired by the 1994 local World Cup jersey.

Argentina national team’s latest Jersey still adopts the traditional sky blue color. There are two sky blue stripes on the front and white stripes in the middle. The color matching is very harmonious. The sleeves and collar of the shirt are dark lake blue, and the shoulders are adidas’ signature sky blue three stripes. Argentina’s national team jersey has always been a popular one.

Home jersey: The design is inspired by the classic design of the 1993 America’s Cup. This also happens to be the last time Argentina won a major championship.

Home jersey: Nike updated the design of the Croatian red and white compartments, expanding the area covered by each grid.

Away jersey: The same design as the home jersey, except that the color is changed to black and blue.

Home jersey: The most classic design, they have won the World Cup 5 times wearing this jersey.

As the most “one-stop” presence in the world for the main color of the jersey, the Brazilian team’s samba yellow jersey is famous for its third summit in the 1970 World Cup in Mexico and the permanent holding of the Remit Cup.

Away jersey: After the 2012 European Cup, the German team restarted the green jersey for the first time. The design was inspired by the 1994 away jersey.

The 90 World Cup jersey is the most beautiful jersey in German history. The essence of the jersey is the black, red and yellow stripes on the chest, like an eagle flying high. At that time, the German team was the golden generation of the German national team. Klinsmann and Mataus brought a great impact to the fans.

Away jersey: inspired by the Mexican team uniform of the 1950s, with green, white and red Mexican stripes on the chest.

Away jersey: Adidas called it the most fashionable design in blue and yellow.

Home jersey: The design of the contrast pattern is inspired by the jersey design in 1984.

In 1966, the England team wore this red jersey to defeat Germany and won the only World Cup so far. This red jersey not only remain in the memory of fans, but also is recorded in history forever. Superstars such as Bobby Charlton, Hirst and Moore are all witnesses of the glorious era. The simplest red style carries different feelings.

The badge on the chest is the logo of the Football Association and the national team that the Saudi Football Association has just launched in 2017. The date palm, the Middle East Green Eagle and football have jointly built a new image of Saudi football. The letters “KSA” below are the English abbreviations of the Kingdom of Saudi Arabia.

Portugal’s away jersey design is inspired by Portugal’s nautical history. The jersey design is fresh and full of vitality, which also means that Portuguese football talents are coming out in large numbers. The French team’s home jersey is designed to reflect the national colors of blue, white and red. The back of the jersey is decorated with blue, white, and red strips, symbolizing the integration of French multiculturalism; and the open collar design allows The jersey looks very elegant. The new home jersey reproduces the three colors of blue, white and red from head to toe, perfectly paying tribute to the French flag.

In the 1974 World Cup in Germany, the Dutch team, which entered the World Cup for the first time, gave the jersey an extraordinary aura with the orange of the Dutch royal family. From then on, the Dutch Three Musketeers, Borgchapp, Van Nistelrooy and today’s Robben, the artistic football presented at their feet all fully interpret the Dutch jerseys.

The war did not prevent Croatia from entering the World Cup. In the 1998 World Cup, “Golden Left Foot” Su Ke led Croatia all the way to the semi-finals of the World Cup, until the semi-final lost to the host French team. The asymmetric red and white grid stole the limelight as soon as it appeared, and the two unusual colors outlined a wonderful chemical reaction.

The 2002 Cameroon sleeveless jersey retained Cameroon’s classic green, yellow and red main colors. The three slashes under the ribs of the jersey symbolized the scratches left by Cameroon’s nickname “Lion”. However, this jersey was banned due to irregular sleeve design, and the players had no choice but to add black sleeves to participate in the race.

The Italian national team’s New Jersey is more retro in design, which also reminds the fans of the glorious years of Italian football. The cuff and collar of the new shirt skillfully introduce the design of the Italian three color flag, which shows the national honor and emphasizes that the “blue Legion” is the pride of the whole country.

The blue of the Italian jersey in 2006 is more pure and exquisite. More importantly, under the blessing of handsome guys like Nesta, Cannavaro, Totti, and Gilardino, the fashion of this jersey instantly exploded.

China must be the Chinese team’s jersey first. Although the Chinese men’s football record is mediocre, but the design of the jersey has never been inferior. The jersey uses a traditional red and yellow collocation, with a woven stripe design on the back of the collar, and a dragon pattern on the inside of the jersey. In addition to the Chinese dragon pattern in the team emblem, Nike’s unique trefoil yarn is used on the sleeves to abstractly present the flames spit out by the dragon. The overall design is very unique.